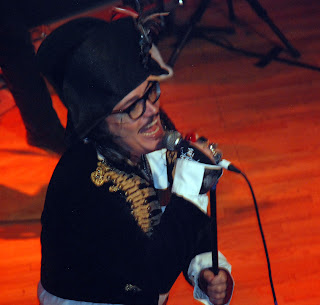 I go to a lot of shows, maybe too many. Some shows I go to become a distant memory within a few months. Then, there are others, like Adam Ant's show last night at the Crofoot that end up getting time-stamped in my memory so it can be recalled upon fondly for years to come. Reason being, this show was special for Adam Ant and his hundreds of fans in the area that were all chomping at the bit to experience an Adam Ant show. After all, the last one was over 15 years ago.

In front of a sold-out audience that packed the floor to the very back of club, Adam Ant started his set off with his back to the audience, letting the anticipation seep in. Then he turned around and cranked into a furious set of old Adam and the Ants punk songs that included "Plastic Surgery" and "Kick." The set was also peppered with all the hits which the crowd quickly recognized and sang along with like "Stand and Deliver" and "Kings of the Wild Frontier." With a set that packed in over 25 songs, Adam covered the bases throwing in some of his later solo tracks and even a new one, oddly titled and about "Vince Taylor."

Adam was backed competently by a band that included bass player, guitar player and of course, two drummers. One of the drummers was female in a silver outfit that was a pretty amazing sight: 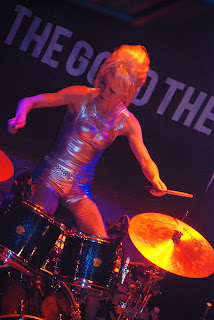 He was later joined by a female vocalist that had her own something to add to the show, which I unfortunately couldn't get a picture of, but it's worth the effort to google it. With the band and Adam cavorting around the floor in his pirate garb, the songs flew by with a raw intensity that came near an ending with a brilliant trio of his hits, "Ant Music," "Goody Two Shoes" and "Viva Le Rock." A couple more vintage punk tracks ended his set.


The crowd wanted more and Adam Ant and the Good, the Mad & the Lovely Posse came back for their encore which was a full serving of five more songs, including a cover of T. Rex's "Get It On (Bang a Gong)" and his devastating b-side "Physical." The night was over a little after midnight and just in time to catch the Tigers play-off win. To say it was an excellent night would be an understatement. It was a perfect night!

I'll tack on one post note to the show and let you know that the opening band Brothers of Brazil kicked the show off with some brilliant humor and catchy samba-punk. The two brothers charmed the audience with their songs of hating and loving the Beatles, a cover of "Imagine" and even some songs with Portuguese. 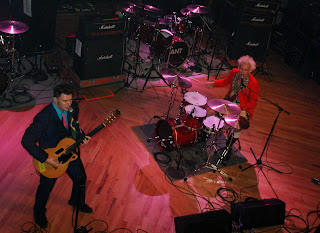