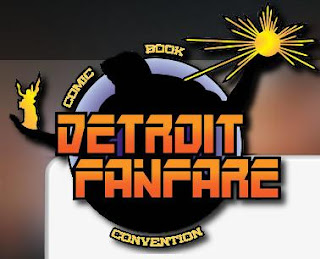 MCB some free tickets to hook you up for Detroit Fanfare 2012
email motorcityblog@earthlink.net for your chance to win

Calling all comic book lovers: Detroit FanFare is back for its third incarnation. The event, which takes place October 26, 27 and 28, at the Hyatt Regency Hotel in Dearborn, will be an all-ages convention that celebrates the comic book industry and its roots.

"We are the resurrection of the original Detroit Triple Fan Fair, which was the country's first comic book convention and was held in downtown Detroit in 1965 at the Book Cadillac Hotel," says Tony Miello, co-promoter of Detroit FanFare 2012.

Organized by members of the comic book community, the event will feature an array of special guests, including Sam Jones, best known for his role as Flash Gordon in the 1980 film adaptation of the comic strip, and Michael Jai White, star of the 2009 action/comedy Black Dynamite.

The weekend will kickoff with a Zombie Walk, starting Friday at 5 p.m., outside the convention entrance. Undead of all ages are welcome to participate and all in zombie attire will get free admission for the night.

Spill Some Blood, Find Some Love

Among the weekend's featured activities are Blood 4 Comics and Sci-Fi Speed Dating. Stop by the Detroit chapter of the Red Cross on the convention floor to donate blood and get a stack of comics free. For those attending the convention stag, stars of the TLC show Geek Love will be at Detroit FanFare for some rapid fire love connections. Participants for Sci-Fi Speed Dating should visit www.Detroitfanfare.com to preregister.

Kids 12 and under are welcome free on Sunday. The convention features a Kid's Area with a number of family-oriented activities, including Trick or Treating and costume prizes.

Detroit FanFare is touted as the most affordable convention on the Comic Con circuit. Weekend passes are only $15. Children 12 and under are $5 on Saturday and free on Sunday.

Tickets include admission into Friday night's preview party from midnight to 2 a.m. in the Marquee Ballroom, featuring music by the Buddy Black Band. The official convention party takes place Saturday, from 10 p.m. to 2 a.m. in the Marquee Ballroom. The party will feature a Best Costume Contest. Admission is free to ticket holders ages 21 and over.

"Our aim is to pay tribute to all those in the comic book industry who came before us," says Miello, "and to acknowledge the importance that Metro Detroit played in the industry's history."

For more information, visit detroitfanfare.com. Visit them on Facebook at  www.facebook.com/detroit.fanfare