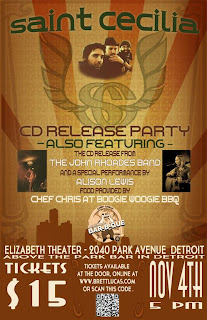 We were just wondering if you have heard about this killer gig on Sunday?
Saint Cecilia is comprised of Todd Glass on drums, James Simonson on bass, and Brett Lucas on guitar and vocals.
When the guys are playing together, they blend their collective influences to create a unique sound of Bluesy Funky 60's Hip Soulful Detroit Rock n' Roll.
November 4th,2012
The Park Bar in Detroit at Elizabeth Theater (the upstairs performance venue)
2040 Park Ave. Detroit, MI. Bar: 313-962-2933
Alison Lewis will be performing
The John Rhoades band will be performing and also releasing his CD, so it's a double CD release party!
Show starts at 5 pm
Catering provided by Chef Chris at Boogie Woogie BBQ
Doors at 5pm
Alison Lewis 5:30-6pm
Dinner at 6pm till 8pm
John Rhoades at 6:30-7:30
Saint Cecilia 8-9pm.
Open Jam 9-10pm
https://www.facebook.com/events/358895330867629/
Tickets available at www.brettlucas.com or at the door.
Should be a great Detroit party!
Posted up by DIETROIT on 30.10.12