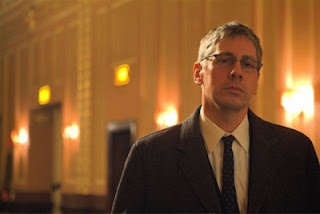 Khalid Hanifi, a longtime fixture on the Ann Arbor independent music scene, is poised to release his new solo album A Brief Respite From Shooting Fish In A Barrel.


A Brief Respite… is the follow-up to Hanifi’s well-regarded solo debut Pamplemousse Presse (2008). He describes the new collection as “an album of resolutely non-partisan politically and economically themed songs, the sensibilities of which are undoubtedly colored by the fact that a) I’m an Afghan-American, and b) I think I’m much smarter than I actually am.”

Hanifi, “one of the best weavers of lyric and catchy melody since Andy Partridge” (Power Popaholic) has been the primary creative force behind some of Ann Arbor’s finest indie pop bands, including Map of the World, Kiss Me Screaming and Maypops. The Ann Arbor Observer singled out his “uncanny gift for melodic intervals that ring true,” while Absolute Powerpop says Hanifi’s music “should appeal to anyone who values smart, sophisticated pop.”

All Music’s review of Kiss Me Screaming’s debut was quite effusive in its praise: “If you took Revolver,” Pet Sounds, the first Cheap Trick album, and all three studio albums by Iggy & The Stooges, threw ‘em in a blender and set it on ‘grind,’ then you’d have a pretty good idea of what Kiss Me Screaming sounds like.”


Cannonball Underground is an eclectic funk, soul, and rock music collective from Detroit. The band is diverse in background, as well as style and age. Noted for its high-energy live shows and top-notch musicianship, the elder members of Cannonball grew up in Detroit duging the Motown era. The famous label and many others like it at the time became exemplary for racial integration into popular music. Such is the spirit of motor town music yesterday and today. Amalgamation has been the mantra of Cannonball from the start. Founding member, Jay “Bird” Cook, first began to work with the Motown and funk sound when he found space to share with two rotating members of the P Funk All-Stars. The experience led to musical run-ins with future Cannonball Underground saxophonist, Dezzie McCullers Jr. highlighted in their single “Sing Me A Song” and singer Bobby “Cane Man” Dixon who’s baritone voice is featured on their original  “Way Gone”. Also on the scene at that time were keyboardist Eric Washington and bassist Greg Nance, frequently used on recordings and live projects. Eric (E-Dubs), highlighted on the original “Optical Liquid”, is rooted in with the Motown Records family and brings a techno/drum and bass style mixed with pop and funk. Greg (Godzilla), featured in the tune “V-Funk”, is awesome. Fireballs shoot out his eyeballs during bass solos, be sure to bring a fire extinguisher. We don’t have insurance.

With combined experience spanning over three generations Cannonball Underground presents a unique and timeless edge to the motor town sound.
Posted up by Detroit Area Dork on 29.10.12