REVIEW: Amen Dunes in A2 by Esme McClear

I came upon Amen Dunes when my copy of The Unified Field Collective came in the mail. Inspired by Wallace Berman, the magazine/ journal brings together different artists, musicians and writers who touch on the transitions between the primal and the academic.

Included in this 60-page color printed journal is a clear 10” vinyl with songs by Robin Pecknold of Fleet Foxes, Bonnie “Prince” Billy, Department of Eagles – a Grizzly Bear side project – and Amen Dunes. 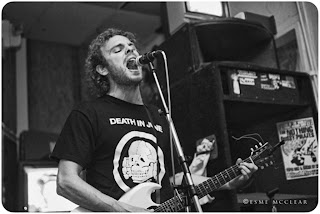 Damon McMahon started his solo project of Amen Dunes in 2006 with home recordings onto tape. They never made their way out. He then moved from upstate NY to China, only occasionally writing music. In 2009, he released DIA and came back to the states with another release in 2010, the Murder Dull Mind EP, made up of home recordings done in China. His latest, Through Donkey Jaw, was recorded in 2011 on Sacred Bones Records, and is his first full length release.
Amen Dunes opened for Godspeed You! Black Emperor last Saturday at the Majestic Theatre.

I was unable to attend that show so I snuck away to the secret Ann Arbor show at The 3rd Death Star on Tuesday, where he played with local bands Monogamy, K9 Sniffies, and Protomartyr.
When Damon took the stage at this basement show it was, as he reminded us, “incredibly intimate.” 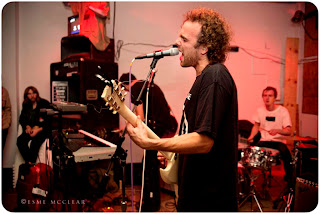 There were maybe 20 people as opposed to his previous show with a sold-out 800.  The quiet hum of his music filled the room with a feeling and sway of repetitive chants and introspective words you can barely make out. In a recent interview he did say that as difficult as his lyrics were to decipher, he did want them to be “heard”, so he’s included a lyric sheet in Through Donkey Jaw to help us all out.

“Bedroom Drum” and “Baba Yaga”, my favorite songs on the new record, are both very dream-like, with lo-fi fuzz and echoes that build into the noise and tangles of the mind. Introspective and real, he’s often compared to Syd Barrett, whom I love, so it comes as no surprise that I’m drawn to Damon’s work. 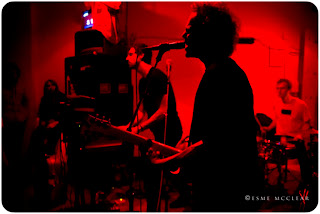 I spoke with him after the show and shared my recent discovery of his beautiful songs, and he recommended MDM because of my initial interest in “Sixteen,” the demo found on the Field Collective vinyl.  The EP is more loose and experimental than his latest LP, but just the start of my shiny, new discovery. 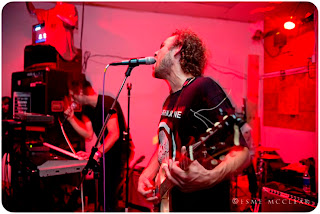 Words / Photos by Esme McClear
www.esmephotography.tumblr.com
Posted up by DIETROIT on 22.10.12