Halloween celebrating got kicked into high gear Friday night as hundreds dressed in costumes lined up outside Elektricity hyped up and zoned in on an all-night party experience.
Enjoy the over 150 pic slideshow of the elaborately dressed sexy fans:

Dressed as the villain Bane from the latest Batman flick, DJ David B. started up the night with his set of accessible electronic dance. On a normal night before 11pm you’d expect a thin crowd to be milling about with drinks. This was definitely not the case tonight as a crowded floor with rowdy dancing started early and really never stopped. 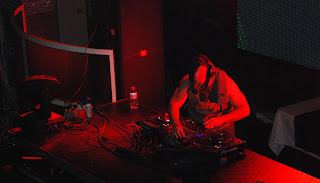 When Krewella (no costumes!), took the stage around 11:30pm the place was packed to its limited with costumed partiers overflowing the dance floor and packing the balcony.  Krewella, from Chicago and comprised of 2 overly-excited girls and their overly composed male counterpart, played a screaming set of aggressive electronic dance music. Krewella’s music which combines female vocals with dancy electro beats that trail into intense dub step breaks thrilled the crowd for over an hour. Hands were in the air, bodies were moving and drinks were spilled and re-filled.

Zed’s Dead dressed as a Rastafarian (or maybe as Don Was) and Abe Lincoln, came on somewhere around 12:30am, the crowd flipped the switch from crazed Krewella fans to rabid ZD fan. Signs were displayed, crowd surfing ensued and the night shifted from dance to all out manic expressions of enthusiasm.

And my night didn’t end there. I took a stroll next door to Crofoot’s Cheapy Creepy show which was an entirely different experience with an older but no less excited crowd, with dancing taking place throughout all five (maybe more?) stage or DJ areas. I snapped some photos, gave a few high-fives then dragged my now fully fatigued ass home.  I love Halloween weekend….