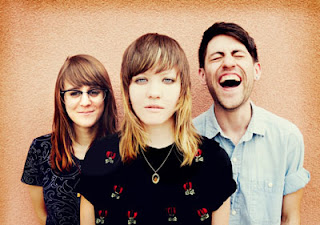 Minneapolis trio Now, Now are playing St. Andrews Hall on November 14th. This fall tour caps off an amazing year for the band which included the release of their critically acclaimed album Threads on Chris Walla's label. On November 7th they'll make their TV debut on Jimmy Fallon.

There is so much to point to (being hand picked by fun. as direct support on their summer tour is one) when it comes to success stories and achievements from this year, but their NPR "Tiny Field Recording" from this spring in Austin, TX really stands out.

NPR calls their music "Perfect Pop" and The Onion describes their sound as "at once instantly inviting-plenty of earworm-worthy angular guitars and seductive synthesizers-and surprisingly deep, with Dalager's wounded alto the perfect conduit for the band's tales of fragile relationships in flux."

"Threads is expansive, ocean-sized, heart-on-sleeve pop. It's a big ambitious record that sounds like it was built for places like Terminal 5, and who knows, it may not be long before they are headlining there themselves." - Brooklyn Vegan


"...these songs, especially the stuttering "Dead Oaks" and the gorgeous "School Friends," comprise a winning collection of emotional songs about relationships, romantic and otherwise." - Under The Radar
Posted up by Detroit Area Dork on 22.10.12