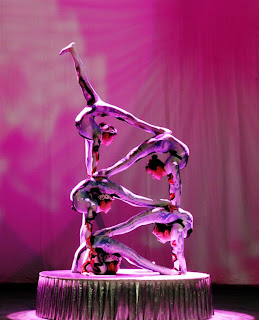 MCB has a pair of tickets to this killer event - email motorcityblog@earthlink.net for your chance to win

Direct from China, The National Circus of the People's Republic of China

Direct from China, the National Circus of the People's Republic of China, performing Cirque Chinois, was founded in 1953, making it one of the longest running and most distinguished circus troupes in China, brings the rare and astounding show to Music Hall Center for the Performing Arts for two shows, Saturday and Sunday, November 24-25  (8PM Saturday- 3PM on Sunday)

One of China's most honored and influential circus troupes rolls out a spectacular new production for its inaugural North American tour — Cirque Chinois. Audiences of all ages will marvel at the extraordinary feats of these talented artists and their signature acts, such as the Great Teeterboard, Grand Flying Trapeze, and Group Contortion, that have earned them worldwide acclaim. For nearly sixty years Direct from Beijing, the National Circus of the People's Republic of China has been performing its unique style of circus and influencing other companies, be they circuses or acrobatic troupes the world over, including Cirque du Soleil, and Ringling Brothers and Barnum and Bailey.

The National Circus of the People's Republic of China is especially acclaimed in China because of the unique acts in their program such as Great Teeterboard, Grand Flying Trapeze, Group Contortion, Straw Hats Juggling, Girls' Balance With Bowls. Many of the Artists in the troupe have won international awards including Ms. Li Liping, the first Golden Clown winner from China at the renowned Monte Carlo International Circus Festival and Madame Xia Juhua, the "Chinese Ulanowa" of the Circus World and Chairwoman of the International Chinese Circus Society since the early 1980's. The Company has won over twenty Gold and Silver medals and various other awards at international circus festivals including the Monte Carlo International Circus Festival.

The contribution the Company has made to the world circus society is profound. During the 1980's, the Company started to change the concept of the "animal circus" to a new style of "non-animal circus" which influenced the then pioneers of "Cirque du Soleil" who invited many coaches from the Company to teach them the acts such as Balancing Chairs, Bicycle and Chinese Poles, which culminated in the revolutionary program "Circus Reinvented!". The Company has toured to eighty countries around the world.

Tickets are $30-$40-$50 available at the Music Hall Box Office or visit www.ticketmaster.com

The Detroit International Music Society is a new and exciting Music Hall initiative that is committed to bringing our community together by using the performing arts as a vehicle for understanding.

History of the Chinese Circus

The origin of the Chinese circus is something of a debate. However, what is clear is that it is an ancient art. First records date back over 2000 years to the Qin Dynasty (225-207BC) when China was unified by the First Emperor Qi Shi Huang. It is believed that the art actually started about 3000 years ago.

Some believe that the circus evolved out of the Imperial court performers, something similar to court jesters in Medieval Europe. These performances, however, tended to be quite formal and staid, and it is believed that the adaptation of some of these acts into popular performances for the people in turn became popular with the ruling classes. Given the age of the art, it is likely that the circus was in fact a folk art which was later adopted by the imperial houses. The ancient Chinese came to call the circus "the show of a hundred tricks".

Rather like in Europe, families became involved in the circus, and a family tradition developed with skills being passed from generation to generation. The most famous Circus families were well known. In 1949, following many years of decline because of war, the art received a boost from the government of the People's Republic of China as an art form to be preserved.

There are over 200 circus and acrobatic troupes within China today and most of them have toured around the world. Within China, acrobats in the circus troupes are regarded with respect and admiration. Training begins as early as four years old. Specific acts' training with the troupe may begin by the age of eight. Basic training---balancing, tumbling, dancing, flexibility and strength---is given in the first early years. Although some children can perform at early ages, normally performers start their career in their mid teens.

There are many classical acts. But after 1949, Chinese circus troupes have all developed into non-animal performing companies concentrating on developing human performing acts. Particular to Chinese circus is the dancing lions. This act is in fact rooted in Buddhism. The lion is a Buddhist symbol of good fortune, and rivals the dragon as the most auspicious animal to guard against evil. The lion is also the animal depicted in Buddhism as the carrier of wisdom. The lion dance is a display of balance, co-ordination and strength combined into one. The ease with which the two acrobats within the lion's costume perform as one belies the difficulty of the act.