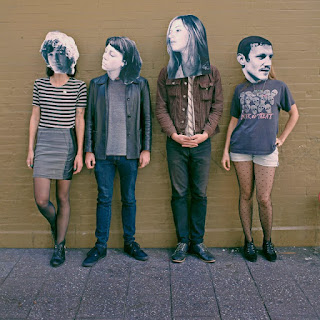 
Sunday, November 11 at PJ's Lager House
9PM, $5
The Mallard are an inside-out-echo-laser-garage-psych-rock four-piece from San Francisco. Their home fried songs harness the naked abandon of 60's punk (think earliest syd barrett era pink floyd), but inject the form with a deranged spirit all their own. Close attention to texture and dynamics allow the band to explore unusual terrain – to grant access into unexpected realms of beauty and terror...with dessert.

In 2009, songwriter Greer McGettrick (guitar/vocals/drums) moved to San Francisco and began performing as The Mallard, self-recording an initial eight-song cassette tape (which would later catch the ear of one John Dwyer), and fronting the group through several incarnations, including a stint playing solo and drumming with her feet. In early 2011, she invited her friend Dylan Tidyman-Jones (guitars/keys/backing vox) to drum. They played shows for a while as a duo, including a west-coast tour. Their first full-length LP, Yes On Blood – again self-recorded by Greer – was released on Castle Face Records in February, 2012. Multi-instrumentalist Dylan Edrich (bass/guitar) came aboard, and as a three-piece they toured with Thee Oh Sees, including shows at SXSW, and recorded a video with Hannah Lew (Grass Widow). Miles Luttrell (drums) is the groups most recent addition. The Mallard perform frequently in the bay area, are soon to embark on full US tour, and have a host of record releases in the works. Hold onto your ears holes....

Habibi is the brainchild of Rahill Jamalifard and Lenny Lynch. Together, the two Detroit natives started the all girl, Brooklyn based project in the spring of 2011. Growing up with the harmonious sounds of Motown and the punk attitudes of Quatro and Iggy, their music invokes the same simplicity and fiery spirit.Jamalifard’s Persian ancestry and Lynch’s love of Middle Eastern culture are evident in the bands name (Habibi’s translation is my love in Arabic), their mystical lyrics, and their eastern tinged melodies. In the short span of time since their formation Habibi has captured the interest of audiences and labels abroad, eager to hear more of their simple and catchy songs. The four piece featuring Karen Isabel on drums and Erin Campbell on bass look forward to their upcoming single and their first full length album.
Posted up by Detroit Area Dork on 22.10.12