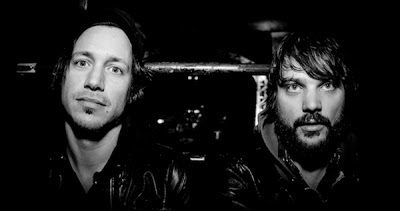 Send an email to motorcityblog@earthlink.net for you chance to win a pair of tickets

Everything about Canadian power-duo Indian Handcrafts seems to defy possibilities: a two piece that's louder than a hundred bands, kicking out one of the year's most riff-rollicking albums that was recorded while the guitarist had a broken hand! They're two friendly, soft-spoken Canadian guys sounding like the Funkadelic Mothership crash landing on top of the Planet Caravan in Interstellar Overdrive.

Indian Handcrafts' well honed, massive melodic heft seems to belie the simplicity of instrumentation between drummer/vocalist Brandyn James Aikins and guitarist/vocalist Daniel Brandon Allen. While their songs feature hints of heavy, technically skilled bands like Big Business, Hella and Tweakbird, there are also strong melodies and a vocal intensity inviting comparisons to artists ranging from Death From Above 1979 to Jack White. Top that all off with a rhythmic groove reminiscent of a hybrid of ZZ Top's Tres Hombres and Funkadelic's Standing On The Verge of Getting It On and it's clear that Indian Handcrafts are much, much more than the sum of their parts.

Bursting out of Barrie, Ontario this pair of charming gentlemen immediately impacted the world with a self-released 8-song debut album in 2011. Cathy Pellow of Sargent House quickly took notice and signed the band on to management and the label. Shortly thereafter, Civil Disobedience For Losers was recorded in Los Angeles with Kasai and featuring special guest appearances by Melvins drummers Dale Crover and Coady Willis. Even with such superfriends assisting the proceedings, Indian Handcrafts prove their own exceptional strengths throughout the album.

"The doctor said if you go and record that's your problem if it gets worse," Allen explains of recording with a broken hand. "It was a little painful some days, but because of being there in the surroundings it was easy to get around that. It healed fine." Overall, the duo says the recording came together very quickly under Kasai's guidance, but it's the bond between Aikins and Allen that gives Indian Handcrafts its lean, ferocious personality. "We first started this band when playing in another band that was pissing us off," Aikins says. "We were the two who always got along. I can't ever see us having anyone else in the band. Unless Toshi played tambourine."

Civil Disobedience For Losers will be available everywhere on LP, CD and download on October 30th, 2012 via Sargent House.