Theatre Bizarre Returns With The Summoning October 20, 2012 at The Masonic Temple

Creators of Theatre Bizarre Return With The Summoning
DETROIT, MI - September 10, 2012 - John Dunivant, the man behind Theatre Bizarre – the legendary underground Halloween masquerade – will once again hold Detroit’s most elite partygoers in his thrall using the seductive force of his latest creation – The Summoning.
For the first decade of the 21st century, Theatre Bizarre broke the laws of man and nature. On one night each year, a dark carnival came to life in the shadow of the now abandoned Michigan State Fairgrounds in one of the Motor City’s most dangerous neighborhoods. The lucky few who were able to get tickets for the annual event were treated to a show unlike any other, at a place that could only exist in a city that has better things to do than enforce zoning laws. Complete with Ferris Wheel, a roller coaster and a half-dozen stages, Theatre Bizarre was an immersive, decadent, pyrotechnic marvel until it became too large for even Detroit to ignore. In 2010 it was shut down. Thousands of diehard fans and true believers mourned.
In 2011, Dunivant and his crew (most of whom are volunteers) introduced the world to their new home and their new direction. The Initiation was held in late October at Detroit’s Masonic Temple – the largest temple of its kind in the world. The venue’s confounding architecture and shadowy history dovetailed perfectly with Dunivant’s new vision.
“There’s a secret society,” explained Dunivant. “Templum Balatro. The Temple of the Fool. We celebrate decay – the decay of society, of moral fiber, of the flesh. We don’t whistle past the graveyard. We dance in it.”
The sprawling temple played host to hundreds of music acts, sideshow performers, burlesque dancers, dominatrixes, suspension artists and the onstage branding of volunteers from an eager pool of thrill-seeking attendees. In cloaks and masks, the crowd reveled in the shameless, sweaty decadence of unfettered indulgence. Last year, the revelers were initiated. This year, they are summoned.
The Summoning will be held on October 20, 2012 at The Masonic Temple at 500 Temple Street in downtown Detroit. The doors open at 7pm. Included in the featured acts will be Miss Exotic World of 2010, Miss Roxi DLite, 2012 Kresge Fellows, Passalacqua and The Squidling Brothers Circus Sideshow from Coney Island, New York. Food and drinks will be available for purchase. All attendees must be 21 years of age or older. Costumes are mandatory. 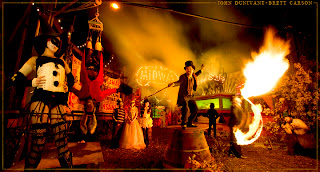 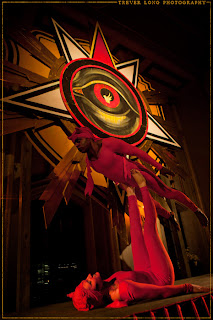