The Afghan Whigs came back to Saint Andrews Hall in Detroit Wednesday night on their first national tour in 13 years. Lucky opening act Wussy took the stage around 8:15, bringing back smooth and pleasant sounds of The B-52s and R.E.M. with just a dash of Flaming Lips plus a pedal steel. Unfortunately, their sound was flat, and the drums were lost in the mix for much of their set. Lead vocals shared by Lisa Walker and Chuck Cleaver blended well, but Wussy's end result was barely satisfactory if not slightly disappointing, given that the sold out crowd that filled the hall waited in anticipation for a band in stark contrast. The crowd remained kind to them, however, with the promise of change. It may have helped that John Curley of the Afghan Whigs sat in on bass for a song or two. 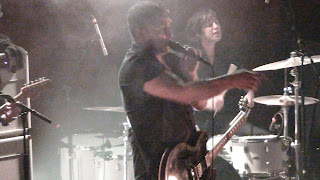 Red velvet curtains made up the simple backdrop and a single large Persian rug in front of the drum kit revealed itself as the the stage was cleared of the opening act. Right about the stroke of 9:30, lights dimmed and the show began quietly with the swirling and buzzing sounds of "Crime Scene (Part One)." The mesmerized and starving audience exploded wildly as Dulli, McCullum and Curley walked onto the stage, joined by guitarist Dave Rosser and drummer Cully Symington (both from Dulli's Twilight Singers), plus Doug Falsettti on percussion and backing vocals and Rick Nelson on cello, violin and keys.

Now, I've witnessed the raw power of this band several times before, but never have I heard such a no-nonsense, song-after-song set from them like this. Dulli looked like he's been taking care of himself lately, and his voice has never been stronger. Admittedly, I used to especially enjoy Dulli's between-song antics, but I would certainly trade it all for his strong voice and the medley mood only The Afghan Whigs can create, melding material from all of their records (they usually skip the first two completely) with Motown quotations and even a current pop hit, going from one song right into the next. It was an all-pro rock and roll show.

Danceable, funky favorites from 1965 elicited screams from women in the crowd, and the dark, growling power of classics from Black Love and Gentlemen like "Fountain and Fairfax," "My Enemy," "Summer's Kiss," "Gentleman," and an impressively reworked "When We Two Parted" were performed with the tightness and dynamic power that these songs deserve. As usual, there were plenty of allusions to Motown hits, but most memorably it was the great Afghan Whigs ballad, "Faded" ending paying tribute to a previous decade's great ballad, "Purple Rain" that really hit the mark.

The surprises were "I'm Her Slave" and "Conjure Me" from Congregation and "Retarded" from Up In It, where Dulli proved that one of the greatest recorded off-key screams can be even greater and more perfectly off-key live. These songs seemed to emphasize both the growth of the band as well as how unique they have always been.

Dulli thanked "one of the best audiences in rock 'n roll," but compared to past Afghan Whigs shows, the energy at Saint Andrews was mostly brought by the band. There was plenty of cheering to go around, but the floor-bouncing, fist-pumping audience of the 1990's has apparently become older and glued to their smartphones. Luckily, there were still pockets of history up near the stage and in front of the band to make up for the emotionless hipsters in the back.

As we all walked out onto E. Congress, I was consumed with nostalgia and with the warm, hopeful feeling that I got from hearing Dulli singing so well. I felt grateful for the opportunity to see him so visibly strong and healthy, not to mention looking so happy playing with his bandmates. It certainly begs the question: maybe these guys should get together, make records, tour… You know, start a career. They certainly have something special going on.
- Michael Welchans
Posted up by Unknown on 29.10.12