Nailed it. Blew the roof off the joint! You know the kind of show I'm talking about; one of those shows that stays with you for a couple of days. JD McPherson and his band delivered a solid show that had the capacity crowd at the Magic Bag up on its feet and screaming, Detroit style. "All showmanship aside" he said at one point "and I'm not making this up, this has been - hands down - the best audience on the whole tour." 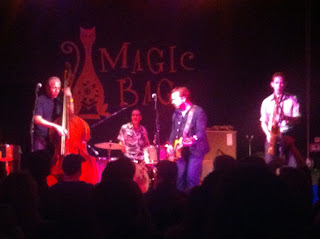 It's no wonder that NPR named them an "Artist You Should Know." As they dropped gem after gem from their Rounder release, Signs and Signifiers, I was blown away by the caliber of these musicians. Although JD was fighting off a bad cold and had lost his voice the night before, he belted out number after number with style and ease. Complemented by the unreally smooth playing and presence of Jimmy Sutton, they were as much fun to watch as they were to listen to. The rest of the band, who I will apologize to now for likely getting your names wrong, were a well oiled machine. Ray on the piano and organ, Tom on the drums, and Brad on the sax and piano once in a while. This band is tight.

If you get a chance to see these guys, and I mean even if you have to drive a few hours to do it, do it. They deliver a live sound that's remarkably close the the record. The record draws a lot of its mojo from the vintage mics and tape deck they they used to record with at Jimmy's Hi Style Records in Chicago. That can be a difficult thing to reproduce in a live setting, but the real mojo from this band isn't dependent on mics and tape decks. It comes from their fingers and throats.

If JD McPherson isn't coming to your neck of the woods, and you can't change necks, do yourself a favor and watch these videos. Heck, watch 'em anyway. They're good. And learn an little more about these guys at jdmcpherson.com. There's more to their story than just great rock 'n' roll. But naturally, that's my favorite part of the story.