Review of Brothers of Brazil/ Adam Ant at the Crofoot


The crowd at this concert was unsurprising full and lively and in a partying mood. The opener delighted everyone with their animated humorous brand of rock and roll, punk and classical brazilian music.   Two brothers Supla and Joao comprise the act. The drummer and singer was extremely theatrical and had an arresting punk rock stage outfit. With loads of charisma, hilarious lyrics and revisions of well known songs, covers of Girl From Ipanema and Imagine by John Lennon their set proved to be extremely entertaining. I particularly enjoyed an original about Amy Winehouse complete with crow noises and lyrics about the paparazzi's vile pursuit of her. Visit http://brothersofbrazil.uol.com.br/onmyway/ for more info on this fun and entertaining act.

Adam Ant and his band were in top form. He expertly wound up the crowd by spinning around dramatically after having his back and elaborate ruffled neckpiece to the audience for almost the whole first song. Theatrics aplenty here. Of course! Its an Adam Ant show after all.  A wonderful backdrop and a tight band with two drummers one of which was a precise and fetching brunette in a shiny silver getup and a captivating brunette and almond eyed female singer in Aeon Fluxesque red latex number added to the excitement and high energy of the evening. The set comprised of Adam's vintage punk and excellent high energy classics like Goody Two Shoes and King of the Wild Frontier. After a highly memorable two hour set from Adam Ant the crowd was in a energized and happy mood. Many were happy to run into old buddies they hadn't seen in far too long. The night was magical and celebratory indeed. 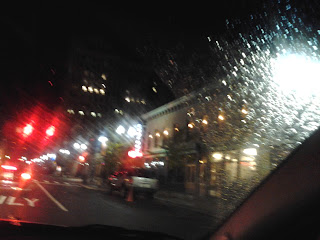