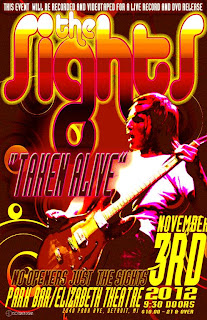 Already In 2012, The Sights have played in front of almost 150,000 in both the U.S. and Europe.  Now, as they return from England, The Sights present Taken Alive, a once-in-a-lifetime opportunity to witness one of Detroit's greatest bands at the peak of their performing power.

Taken Alive is The Sights performing more than two-dozen songs taken from all of their five critically acclaimed records.  Every song will be recorded and captured with a four-camera video shoot. Taken Alive will be available on DVD in early 2013.

Be a part of The Sights --Taken Alive!