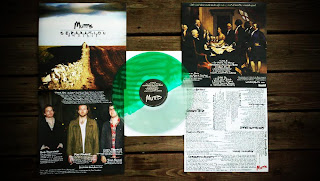 Earlier in the year we had the pleasure of catching MUTTS play a tremendous live show in Hamtramck.  We walked backstage to meet up with the band before the set and hooked up a few beers for the boys who were very fun to talk with and gracious that we were covering the show.  They had not played  Detroit before and were very eager to deliver a good set and they did.

MUTTS are one of those bands that are able to "reinvent" themselves after each song because they were able change it up so well over the course of the set..  After 4 songs I seriously thought there were no more surprises but sure enough up came a tune called "Done it Again" topping it off.

I can't say that for a lot of the bands out there...so get on over to Woodruff’s on Nov. 7, Mutts have a tentative booking at Mac’s in Lansing on Nov. 8.

Band leader Mike Maimone is working to get a last minute Detroit show and he has sent us a handful of very cool vinyls of the latest MUTTS release "Separation Anxiety" to give away on MCB.  Email motorcityblog@earthlink.net for your shot to win and get on out to check this band!