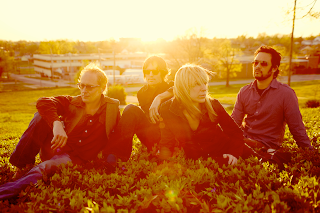 The Heartless Bastards’ story starts in Dayton, Ohio, where Erika Wennerstrom found the name on a multiple choice video trivia game at a bar.

As a songwriting teenager during a time when Guided by Voices and Brainiac were packing local bars and three of The Breeders were still in town, Wennerstrom used to sneak into clubs to check out the scene. “I would just see those people—my music heroes—hanging out at the bar like everyone else,” she remembers. “I could see myself in them. It gave me inspiration to do my own thing.”

After doing the usual business of playing local shows, the trio set out the following year on a regional tour. One of the first gigs of the trip took them to a bar in Akron, where The Black Keys’ drummer Patrick Carney just happened to be one of only a handful of people in the audience. This chance encounter led Wennerstrom and the Heartless Bastards to Fat Possum Records, with whom they released their debut, Stairs and Elevators, in early 2005.

The band moved on with critical praise in their back pocket, including a four-and-a-half star review from Rolling Stone, which took note that, when Wennerstrom “opens her throat on Stairs and Elevators … she sounds like she’s wailing on the shoulders of giants; her sad and angry vocals channeling all the swagger and spit of a young Robert Plant.”

The Decemberists’ guitarist Chris Funk said, “It’s been a few years since I’ve had a voice on repeat in my mind. This voice seems to arrive in my ears while sound checking, often before the shows on a pre-show play list and after shows too — the songs are just perfect and the band has found their spots behind this incredible woman. A unique and enduring artist arrived into our world once again.”